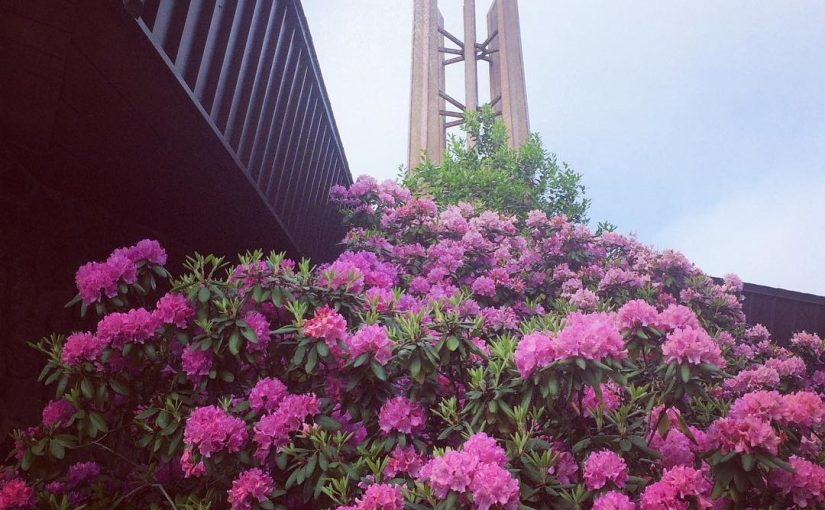 When the sabbath was over, Mary Magdalene, and Mary the mother of James, and Salome bought spices, so that they might go and anoint him.And very early on the first day of the week, when the sun had risen, they went to the tomb. They had been saying to one another, “Who will roll away the stone for us from the entrance to the tomb?” When they looked up, they saw that the stone, which was very large, had already been rolled back. As they entered the tomb, they saw a young man, dressed in a white robe, sitting on the right side; and they were alarmed. But he said to them, “Do not be alarmed; you are looking for Jesus of Nazareth, who was crucified. He has been raised; he is not here. Look, there is the place they laid him. But go, tell his disciples and Peter that he is going ahead of you to Galilee; there you will see him, just as he told you.” So they went out and fled from the tomb, for terror and amazement had seized them; and they said nothing to anyone, for they were afraid.â€‹

I’ve noticed that my life lately keeps wrapping up mid-sentence. When I walk from one side of my house to the other, with a very clear and specific purpose in mind, I’m usually detoured by the most random thins – like that sock, right there, in the middle of the floor. I grab it, planning to toss it into the laundry but then realize I forgot to move the laundry into the dryer. Oh, and there’s that email I need to write and I better post that funny thing my kids said on Twitter before I forget….….wait…I forgot what they said. When I finally return to that original task, hours have literally floated by. I call these mid-sentence moments because my wife and I will start a conversation and in the middle of a sentence, something like this will come up, and we’ll finish the conversation days later. This mid-sentence kind of living is exhausting and it’s also hard because it leaves conversations, thoughts, and experiences hanging in the air. And unless I keep these mid-sentence moments right here, right in front of me, they end up forgotten and falling away. Now I know that most of my mid-sentence living is caused by my life choices. It’s not easy having many competing priorities and living with a family that has their own priorities as well. I have some control over my mid-sentence moments but I also know that this isn’t always true. There are experiences that stop us in mid-sentence and not by our own choice. We are caught up by things and events and people we can’t control. And before we know it, our expectations are inverted. Our plans go awry. Our assumptions are undone. And we become like Mary Magdalene, Mary the mother of James, and Salome, left in mid-sentence.

The gospel according to Mark is a little weird because it ends basically in mid-sentence. Unlike Matthew, Luke, and John, there’s no vision of the resurrected Jesus in this text. Jesus doesn’t speak Mary’s name. He doesn’t walk through locked doors to surprise a disciple named Thomas. We don’t even get to see Jesus having brunch with his friends on the beach. Instead, we get a large stone, rolled away. A young man sitting there, telling the women to not be afraid. He gives them a job, saying “Go and tell.” Tell the disciples what you saw. Tell Peter where Jesus is going. Tell everyone that Jesus isn’t where you expected him to be. And the women, according to this text, go nowhere and say nothing.

Which isn’t really the story we expect to hear on Easter. We already started today by proclaiming that Jesus is risen. We’ve already shouted alleluia. We’re gathered here because we know that someone told; that there have always been women preachers because if the Marys and Salome hadn’t preached, we wouldn’t be here right now. We expect on Easter for the Bible to show us Jesus raised from the dead and yet the gospel according to Mark leaves us, and these women, stuck in mid-sentence – between what we know came before and what now looks brand new.

Now the women already knew everything that had gone before this moment. They had followed Jesus, heard his teaching, watched his healings, and were the only ones of Jesus’ disciples who saw him die on the Cross. I’m sure these women thought they knew Jesus’ whole story. But then, in a completely unexpected way, the women heard that the resurrected life was now a reality. And at that moment, their understanding of their relationship with Jesus suddenly changed. Their connection to God’s Son; this Savior who called each of them by name; who promised through word and deed that God knew them; that God saw them; and that God loved them; this Jesus who gave so many other people new life now had a new life of his own. And because Jesus knew these women, this new Easter life was now part of them. Their mid-sentence life was over and their resurrected life had, because of Jesus, begun.

But, according to Mark, this resurrected life doesn’t show up at the end. The resurrected life appears in our everyday living and it shows up everywhere. We see what this life looks like “when Peter’s mother-in-law is raised out of a fever and freed to serve (1:31).” We see the resurrection happen when a tax collector, a profession in the ancient world that required corruption, abuse, and violence, leaves his tax booth behind to follow Jesus(2:14). We see a person marginalized because of their difference “raised into the center of his community’s attention and is” then fully “healed (3:3).” And we watch a father, knowing that his doubt and his faith are not incompatible, so he bring his most cherished relationship to Jesus because being with Jesus changes everything. (Mark 9) Time and time again in Mark, the sick, the wounded, the marginalized, and the ones society casts aside are raised up, given new life, and then placed into a community called to care and love them. It was only at the tomb, after the good news of new life was told to them, that the disciples finally realized that Jesus had already been filling out the next part of their sentence and the next part of their life.

The resurrection isn’t something we have to wait to find out. It’s already here. In our baptism and in our faith, the new life of Jesus is given to each of us as a gift. This gift isn’t given to us because we’re perfect, or get everything right, and or we come to church every Sunday. No, this resurrected life is given to us because God lived our mid-sentence life and, through the Cross, God pushed us to the other side. It’s not always easy to feel and notice this resurrected life. We are, like those women at the tomb, still living lives in between what has come before and what will come next. The Marys and Salome had no idea what joys, struggles, and experiences their new life with Jesus would bring. But they did know that Jesus was right there, ahead of them, and he is right here, ahead of us. We just need to shift our focus, reset our eyes, look to him, and live into our resurrected lives. Lives where healing, not harm, is all we do. Lives where love of neighbor becomes a reflex because it’s part of who we are. Lives where the walls and dividing lines we build to keep others out so that we can stay in our personal bubbles – those walls need to be torn down. And these resurrected lives are where inclusion, care, service, and love become habits that offer new life to all. The resurrected life knows who we are, where we’ve been, and knows all the ways we failed to serve others without fear. This life knows us as we are, right now, caught in our mid-sentence moments; but with our eye stuck on Jesus, this resurrected life will carry us through into a new reality, into God’s reality, where the next part of our life becomes love.