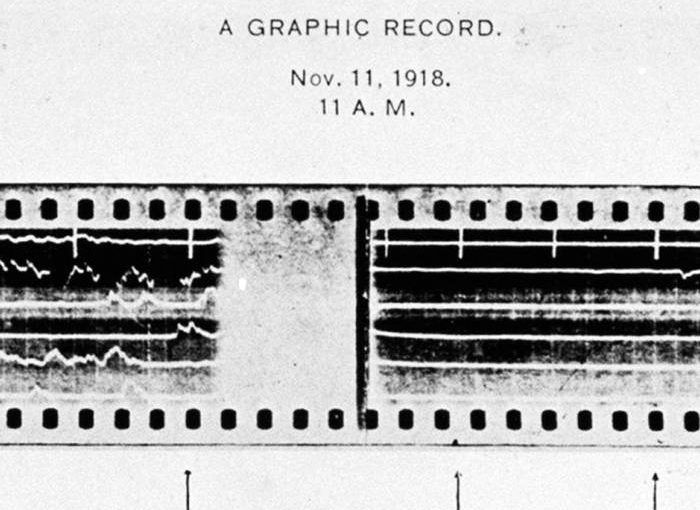 As he taught, he said, “Beware of the scribes, who like to walk around in long robes, and to be greeted with respect in the marketplaces, and to have the best seats in the synagogues and places of honor at banquets!They devour widows’ houses and for the sake of appearance say long prayers. They will receive the greater condemnation.”

He sat down opposite the treasury, and watched the crowd putting money into the treasury. Many rich people put in large sums. A poor widow came and put in two small copper coins, which are worth a penny. Then he called his disciples and said to them, “Truly I tell you, this poor widow has put in more than all those who are contributing to the treasury. For all of them have contributed out of their abundance; but she out of her poverty has put in everything she had, all she had to live on.”

One of the fascinating things about World War 1 is that it’s a war we can see – but one we can’t hear. Even though the war was fought after the invention of the film camera, the videos we have are silent. At the time, sound recordings were mechanically produced by a needle making an etching on wax or metal. The machines that could record sound were simply too big and too delicate to bring into a war zone. Unlike today, where the phone in our pocket can share live images and sounds of wars happening all over the world, the war described as the one to end all wars is one we can’t hear. If want to imagine what that war sounded like, we have to rely on our imagination to fill in the details. A veteran could fill in these auditory gaps, using their own experience in combat or in training as a guide. But the rest of us, well, we have to rely on movies, tv shows, and video games to give us a hint of what war might sound like. However, in honor of today being the 100th anniversary of the signing of the armistice that ended World War 1, the Imperial War Museum in London found a “recording” of what the last 2 minutes of the war sounded like. Now, it’s not a recording as we understand them to be. It’s more of a series of lines on a chart similar to what we see on a seismometer as it records an earthquake. During World War 1, special military units used microphones and other equipment to find out where enemy artillery fire was coming from. Scouts would watch for the flash from the muzzle of big guns as they fired and then turn on a special machine to record on a filmstrip the intensity of the noise those guns caused. And once that noise was recorded, special computations were done to figure out where those big guns were. Most of these kinds of “recordings” were lost after the end of the war. But at least one piece survived. And that filmstrip recorded the last few moments of World War 1 from the vantage point of the Americans located by the River Moselle. A sound company was commissioned to turn these lines into actual sounds. They researched the guns used in the war, measured the noise intensity labeled by each tick on the lines, and even figured out how the ground would reverberated as each gun went boom. They basically reverse-engineered the sound of the end of a war – and in the minute long clip they posted online, you can hear the artillery guns firing up to the very moment the armistice took effect. Then…silence. And for a bit of drama, the sound company added the chirping of birds to its end.

The clip is pretty powerful. It’s the only audio recording we have of what the battlefield in World War 1 sounded like. But what makes it so intriguing – is its silence. Now, before a sound company reverse-engineered those lines on the filmstrip, we didn’t know what it sounded like. It was, in essence, silent to us. But once those lines were decoded, reworked, and made to speak – what keeps us returning to this recording over and over again is the silence embedded in it. It’s not the sound of the artillery pieces that make this recording interesting. What gives it an emotional boost is what’s on there once the sound of the big guns stop. And it’s a kind of loud silence that helps us discover exactly who we get to be.

Now, there’s some silence in today’s reading from the gospel according to Mark that we don’t always see. And that’s because, even though the reading is short, its words invite us to imagine a very loud and noisy world. Jesus was in Jerusalem, filling his time between Palm Sunday and Good Friday by preaching and teaching in the Temple. The Temple was the heart of the city, full of noise and full of people. They were talking, debating scripture, chanting psalms, and trying to speak up over the hees and haws of the animals waiting to be sacrificed. I’m sure there were moments when the crowd, while participating in religious rituals, were silent – but the sounds of the city would then move in. Jesus, at first, added to the noise by speaking about the flashy kind of scribe who’s style and rich living amped up the volume of whatever space they entered. But then Jesus switched things up. He grew silent. He walked into the outer court, the part of the Temple women could go into, and he sat down opposite the treasury. He watched as the crowd filed past the Temple’s version of a church’s offering plate and he heard the clanking of many metal coins as they landed in the treasury. Scripture doesn’t tell us how long Jesus was silent. But I like to imagine that he sat there for quite awhile. And instead of critiquing what each person offered, he waited until a widow came to the treasury to drop her offering into the plate. We don’t know anything about this widow. We don’t know how old she is, where she comes from, or even why she’s there. She, like Jesus, was silent at this moment in the text. And she’s carrying with her two small copper coins worth a penny. That amount of money couldn’t buy her much of anything. Yet it was all she had. And as she dropped those two coins into the offering plate, they barely clanged, making little noise as they landed.

But Jesus heard them. And he broke his silence to tell his disciples about the widow whose silent actions made an incredible amount of noise. The disciples, as we’ll see in next week’s reading, were focused on the bigness and the noise of it all. The large stones, the fancy robes, and the clang of the many coins tossed into the offering plate drew their notice and attention. But the widow was silent to them because her offering was so small, it appeared to make no noise at all. Yet once the noises around the widow were removed; once she was no longer a person in the crowd but rather a person Jesus saw: she became exactly who she had always been: a person God knew, a person God loved, and a person God saw. Her worth wasn’t defined by the value of what she could put in the offering plate nor by what kind of fancy clothes or places of honor she received while sitting around a dining room table. She was, and always had been, a beloved child of God. And since she didn’t have much of anything, she could only be exactly who she was: a widow who, while in God’s house, gave to God everything she had. Her silent place in the world was, according to God, full of a divine noise that only Jesus chose to hear. And she, owning basically nothing, was still willing to give her whole being to God. We, through the Spirit’s help, can do the same because Jesus Christ, through the Cross, gave his whole self for each of us. We tend to focus on the big noises all around us. We chase after whatever is bigger, brighter, and flashier – looking for stuff, experiences, and other people to fill out life with sound. Yet as baptized and beloved children of God, we already carry within us a divine sound that connects us to the source of all life, hope, and love. We are filled by a divine silence that no earthly sound, experience, doubt, fear, or war can ever drive away or overcome. We, because of Christ, get to be exactly who we are: and you, right now and always, are a beloved child of God.