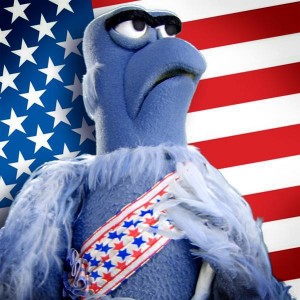 Let me tell you why the United States of America, born 236 years ago today with the signing of the Declaration of Independence, is the greatest country in the world. Is that an arrogant statement to make? You betcha. Do I have any real evidence to back up my statement? Not really. But I do love my country (whether I come off that way or not) and here’s why.

K and I, along with my friend Sonya, boarded the New Jersey Transit 188 bus at the George Washington Bridge Bus Terminal (which, until this day, I never used) and took that bus across state lines to visit Mitsuwa, the largest Japanese Supermarket in the United States (or so their website claims). While there, I enjoyed a lovely Udon noodle dish with some fish shaped red-bean filled and custard cakes (Taiyaki) while everyone around me spoke Japanese. It made me reflect on the greatness embedded in the American story because the very immigrant identity of the United States is what allows me to eat my weight in the pastries of a culture that developed ten thousand miles away. I am allowed through the blood, sweat, and tears, of the founding fathers (who fought against my Tory ancestors) to get fat on the sweets of Japan. If that isn’t awesome, I don’t know what is. 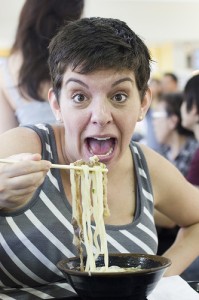 After lunch (which I washed down with a Diet Coke – the nectar of the gods that is a symbol of the mighty corporation that is America), we wandered down the aisles, perusing the many fine items that you typically fill the shelves of stores in Japan. And even though everything was in Japanese, with only a few english words as title filler (like, say, Good Good Eats), I didn’t need to know Japanese to notice the things that were on sale. Again, deep discounted items that are designed to lure me into aisles to buy expensive things – to me, that is as American as apple pie. After we all tossed a bottle of kikkoman soy sauce the size of our heads into the cart, I noticed that I wasn’t the only non-Japanese person buying one. In fact, the great ethnic diversity that gives America its teeth and vibrancy was reflected in Mitsuwa’s shoppers. I heard Korean, Chinese, Japanese, English, and Russian languages being thrown about like we were at a U.N. summit meeting. I saw people of all ethnic and racial backgrounds. And when I looked into the back rooms to see who was doing the packaging, I found my brown brothers working on this national holiday. This…this is why America is great. It is still a land that people will give up their homelands to come to in the hopes of a better future and some money in their pocket. It is a land where the vibrancy of its immigrants is still a defining characteristic of its identity whether the people of the US realize it or not. The founding fathers and mothers might not have envisioned a Japanese Supermarket on the shores of the Hudson, south of the Fort where the Continental Army failed to stop the British Navy from sailing up river (taking Manhattan in the process), and those fathers and mothers might not have ever imagined an American that is non-Anglo Saxon dominated but, by God, the tapestry that they began is still being played out on the shores of these original thirteen colonies. To me, that is amazing. And I know that this story might be playing out in other countries right now but, well, what can I say? I’m a fan of where I come from.