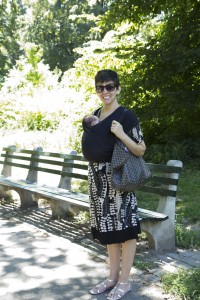 We took little Oliver to Central Park today though the little guy slept through the whole thing. He missed the I’M-NOT-PAYING-THREE-DOLLARS-FOR-A-POP food carts, the miles of lost tourists who are probably stilled trapped inside the park, the runners who kept cursing me under my breath because I was enjoying the view, and the family of ducks that floated below us in the reservoir. Instead, after a “traumatic” experience at the doctor (because who likes going to the doctor’s office?), he stayed curled up next to his mom with only the occasional squirm as a response to my constant picture taking. He didn’t even seem to realize that he rode a New York City bus for the first time nor did he notice his mom playing with makeup in Sephora. Nope, he just sat there, happy as a clam as we wandered through the West Side. Poor kid – he doesn’t know what he’s missing yet. But if his eye movements, his ability to start lifting up his head with his neck, his smiles, and his increased fussiness as a way to communicate with us – if these are a sign of where he’s going, he’ll see everything pretty soon.