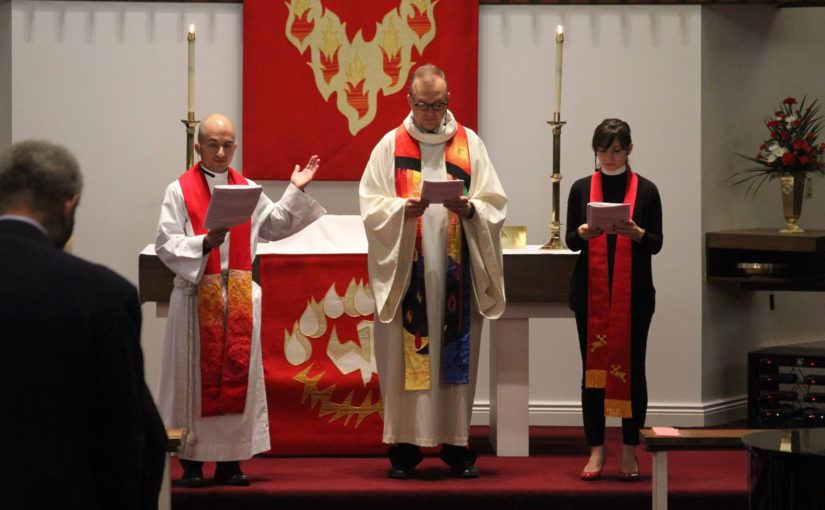 Then Jesus said to the Jews who had believed in him, “If you continue in my word, you are truly my disciples; and you will know the truth, and the truth will make you free.” They answered him, â€œWe are descendants of Abraham and have never been slaves to anyone. What do you mean by saying, ‘You will be made free’?” Jesus answered them, “Very truly, I tell you, everyone who commits sin is a slave to sin. The slave does not have a permanent place in the household; the son has a place there forever. So if the Son makes you free, you will be free indeed.”

My sermon from the 500th Anniversary of the Reformation (October 29, 2017) on John 8:31-36. We were thrilled to worship together with Pascack Reformed Church and First Congregational United Church of Christ! Listen to the recording at the bottom of the page or read my manuscript below.

In New York City near the Empire State Building, there’s an entire city block that’s one of my favorite places to go. 32nd street, between 5th Ave and Madison Avenue, is filled with karaoke bars, beauty shops, and bbq restaurants that let you grill seafood, meat, and vegetables right at your table. This block is the heart of Koreatown, a cultural hub for the 200,000 Koreans and Korean-Americans who call the City and the surrounding area – home. When I lived in New York City, I had an old roommate who introduced me to this place. She was born and raised in South Korea so when we went out, we’d let her order for everyone at the table. She’d look at the menu, pick a few dishes, and switch seamlessly between English and Korean as she ordered our meal. And then, once the food arrived, her stories would start. She’d introduce us to a new vegetable, telling us where it grew, how it was used, and when it was harvested. We learned what foods were served on holidays and which dishes her grandmother made to mark special occasions. In her stories, we met extended family members, visited distant villages, and reveled in the old legends and myths that make a culture what they are. The more we ate, the more we experienced the history, culture, and personal stories that made my roommate who she was. Events that I could read about in my history books – like the occupation of Korea by Japan prior to World War 2, the Korean War in the early 1950s, and the dictatorships and the struggle for democracy afterwards, were fleshed out as my roommate told these same stories but with the names of her family members baked in. One of the dishes she introduced to me is Budae Jjigae, known in english as Army Base Stew. After the cease-fire between North and South Korea was signed, food was in short supply. Processed meats from US military bases were smuggled and sold on the local black markets. Spam, Hot Dogs, and various kinds of ham were mixed with Kimchi, Baked Beans, scallions, and whatever else was lying around. Army Base Stew is one of those dishes where literally everything is thrown into a pot – and you have no idea what you’re eating – but it’s delicious – so you just keep on eating. This dish was invented because people were hungry. Families created Army Base Stew to feed each other and their neighbors. This dish tells a story and when eat it, especially if we’re not Korean or we don’t need food pantries or SNAP benefits to survive, this dish moves us to experience something new. This, I think, is one of the amazing things that happens when we mix meals with stories. When we eat together, every story spoken around the table connects, mixes, and forms something new. Instead of learning about someone else’s history and culture, we encounter it, discovering a history and an identity that’s filled with real people with real names. When we listen to these stories over steaming stews, plates of food, and when we’re surrounded by bread and drink – the chewing on the food and the chewing on the words – changes us. We are no longer what we were before. The story and its storyteller have left their mark.

So, it might be a little strange to begin this sermon on the 500th anniversary of a movement that started in Germany by describing a Korean dish that was invented in the 1950s and that I consumed in a city that didn’t even exist when Martin Luther posted his 95 thoughts about Jesus, faith, and the church on a big old church door in Wittenberg on Oct 31, 1517. But if we’re honest, all of us are doing something a little strange today too. At this very moment, we’re supposed to be in our different church buildings using our different liturgical and theological traditions to feed, grow, and reflect on our faith. Each one of our communities can trace their origin to what Luther started 500 years ago but every one of us, including the Lutherans, have traditions and experiences and expectations that put distance between us. We have a long history of using our arguments about God, Jesus, and the Christian faith to keep us from sitting at the same table. During these last 500 years, our churches are not used to coming together. What we’re doing now is still a new thing. We are, as churches, changing our own spaces to become places where we can tell our stories to each other. And one way we do that is, I think, by following, something Martin Luther knew very well. We share ourselves and our Jesus while eating a meal.

A few years after the Reformation started, Luther was given an old monastery as a home. His wife, Katie Luther, had gifts and abilities Martin didn’t. She was the one who could manage the household, oversee their ten employees, keep track of their finances, and she made sure that their 50 person table was open to anyone who stopped by. Luther had a habit of inviting everyone to dinner. Locals and visitors, university professors and students, the rich and the poor, men and women, boys and girls would gather at that table. These dinners were more than just an opportunity to eat delicious food and enjoy a beer that Katie herself brew. Like our own dining room tables, the meal was a place to talk. We know a bit of what was shared around Luther’s table because people would take notes about what was said. Most of the time, students and theologians were trying to pick Luther’s brain, to get him to share a special insight about Jesus and the Christian faith. But for every question about Jesus, there was a story or a confession or a prayer rooted in an encounter with Jesus himself. Someone would admit feeling depressed or sad, sharing some personal demon that kept them awake at night. Another would ask about a piece of dogma or a rule of the church that was causing them some unbearable pain. Over the clatter of dinner plates and the clanging of glasses, the conversation didn’t stay in the “about stages” for very long. Instead, it dug deep into just how hard the faith of everyday life can be. Painful decisions, long periods of living in shadow, the joy of weddings, and even a father changing their child’s diaper – nothing was off limits at that table because, for Luther, nothing about our lives was off limits to God. It wasn’t enough to just know about Jesus. Jesus wanted to be encountered and experienced in the places God revealed him to be. Jesus didn’t want to wait for us to come to him. Instead, he chose to be with us in our everyday, even in those time and places when we are just living our life and don’t see Jesus right there with us. He is there when we shed tears of sorrow and tears of joy. He is there when we cry out in fear or in hope. He’s there when we have a decision to make that we just don’t want to or when everything right now seems easy and carefree. Our encounters with Jesus are not limited to moments that only feel super religiously. Even when we share a meal and tell stories with people who we don’t usually eat with, Jesus makes himself known to each of us. What matters to Jesus isn’t what we know about him. What he wants is for us to know him because he already knows us. When we came into this world, Jesus knew our name before we did. When we were baptized, we were publically acknowledged as belonging to His holy family. And as we grew up in our own families, cultures, traditions, and congregations, we learned stories that made us who we are and we were met by a Jesus telling us how his story, his life, his Cross, and his resurrection makes us into something new. As we celebrate this 500th anniversary of the Reformation and look forward to the years to come, we will keep doing something that is new and is old, all at the same time. We will keep sharing the stories that make us who we are; we will keep opening up our personal spaces so that we can listen to stories that are not our own; we will share bread and drink with all whom God puts in our path; and we will keep holding close to the One who encounters us with a gift of love, a gift of hope, and a gift of faith that frees us to live as Jesus’ people each and everyday.