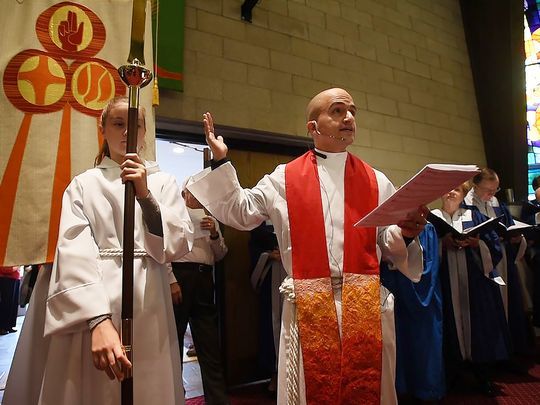 This is a copy of a news article I appeared in on October 30, 2017.. It celebrates a joint worship service with First Congregational in Park Ridge, Christ Lutheran Church, and Pascack Reformed Church to honor the 500th Anniversary of the Reformation. My picture appeared on the cover of the local section in the Record. Article by Michael W. Curley, Jr. Photo by Mitsu Yasukawa. Includes video!

Luther’s break from the Catholic Church started the Protestant movement as others followed suit, resulting in numerous denominations splitting from what was at the time the only Christian church.

The various denominations of Christianity are still related after the Reformation, often referred to as a schism within the church, Stutzel said. Even though they each approach their faith differently, he said, the denominations are more similar than they are different.

“Over the last 200 years or so, the Lutherans in this country, mostly, not all of us, have had experiences where we’ve started joining together instead of splitting apart. We’ve been really acting on joining together,” he said. “There’s a movement to celebrate what’s common to us.”

As different faiths have often used arguments on faith to remain separate, Sunday represented “something strange,” Stutzel said, likening the shared service to Luther’s habit of inviting many different people to his home for dinner to talk with them.

“We’re a united and uniting church,” Suriano said. “So we’re very interested in joining together with other churches from the inception of our denomination.”

The pastors said they have been working toward bringing their congregations together since they each came to their churches in the last three years, including a joint Cross Walk around Easter.

They decided to make events out of the fifth Sunday of a month into special events, and with Reformation Sunday and the 500th anniversary of the Reformation falling on a fifth Sunday, it made an obvious choice to kick off the practice.

“Our motto is, ‘reformed and always reforming,’ so we’re always looking for new ways to connect, have a relationship with God, a relationship with others,” Romero said. “We think that we can still be together and connected in all the ways that we have in common.”